Better Things To Do

People amaze me and not always in a good way. Someone that I blogged with in the now defunct Blogstream has been exercising his freedom of speech by calling all women who disagree with his support of Trump, things like old hag, bitch and the C word. My only comment to him after 2 days of seeing his behavior was that if supporting Trump meant using the kind of language, I'd pass. I spent the rest of that day deciding that I might need to unfriend him for the sake of my own sanity. Went to Facebook the next morning to do so and found that he'd taken care of the problem for me. This after his spending weeks complaining that people were unfriending him for his politics. Umm, no. Sorry Bryon, it's because of the hate you're spewing in the name of your politics.

Many of my Facebook friends voted for Trump.. Oddly only 3 or 4 have had anything to say about their choice. Those who decided that they wanted a solid Conservative SCOTUS said that was why they voted for him and they didn't celebrate that win because, as Christians, the need to vote for him didn't make them happy. Supporters who keep spewing their anger at those of us who don't support this president seem to have had the wall, the ban on muslim immigrants, abortion or the defeat of the PC people as the reason behind their votes. Those of us who don't fall into lockstep with that particular block of Trumpeters are on the receiving end of their schadenfreude and it's vitriolic expression.

I'm not being bothered by any of them since I don't feel that arguing online is going to solve any problems. Therefore I am not making a target out of myself since my only contribution to the fight is to post articles I know to be closer to the truth than some things one can find online. I also have this little quirk in my personality. I feel that if someone isn't paying my bills, they aren't entitled to an explanation of my beliefs. I say what I think and I have no need to defend that. I'm entitled to that, according to the Constitution. I have a very dim view of people who want what they want at the expense of those less fortunate than they are. I just stay away from them as much as possible and have chosen to leave their fate on Judgement Day in the hands of a higher power than I am. I have my opinions, but, in the end, do they really matter to anyone but me? I don't think so.

Anyway, because of all the turmoil, I am spending much of my time where I can enjoy my life. That place is in the comfort of my castle with the laptop shut off. I might be cooking, cleaning, sitting in my recliner with the cat on my lap and a book in my hand. I might be out shopping or running errands. I might even be doing some painting. That was what I did yesterday. Today I will sign the piece as I have looked and in my mind it is finished the way it is. In another day I will start the sealing process and grab another surface to see what my mind decides needs to be painted onto it. There's a spark of something running around what remains of my brain, we'll see how that goes.

In the meantime, this is what I did yesterday. I think he's flirting with you. 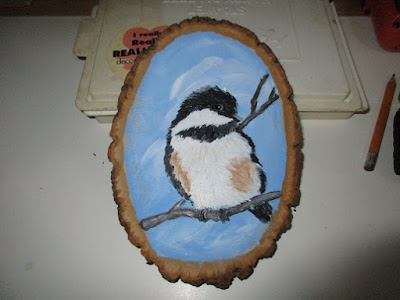