Shortly after 9 am on the morning of September 11, 2001 my phone rang. For a decade now, the quavering voice of my Mother telling me to "turn on my TV, something terrible is happening" has been stuck in my head. When I did turn it on, I saw a scene that looked something like this. 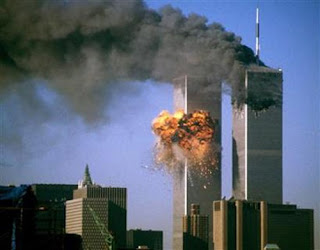 I wasn't able to comprehend entirely what I was seeing and I asked her what happened, what was going on? She responded by saying she didn't know but she thought we were under attack by someone and then she began to cry. At that point the newscast switched back to Tom Brokaw and although I didn't understand a single word he was saying, I knew my world would change beyond anything I'd known up to that point. I was right.

We became a nation of angry, fearful people. We've made decision after decision since then based on the emotions that the knowledge we had become a target created. We've spent  a decade since then waving our flags, shouting our patriotism to the world all the while sending our young men and women off to kill or be killed. Something about fighting so we can preserve our freedom. Freedom for what? To be selfish, greedy, hateful, small minded people?

We take little real interest in our neighborhoods unless someone isn't keeping their property up. No one thinks to ask if that person might need help, we just sit and criticize among ourselves about how they are destroying our property values. Then there's the other neighbor who should be shot for mowing their lawn early in the morning on a Saturday or Sunday. "Don't they know I want to sleep late? Who do they think they are to disturb MY rest?" Of course, the fact that may be the ONLY time they can mow their lawn never enters into the equation. It's always all about us, and what we want.

We teach our children to be bullies, to hate. We spend our time online trying to smear the reputations of people simply because they disagree with us over...well...anything. We accept no responsibility for our actions or our speech. It, after all, is a right guaranteed us by the Constitution so we can say anything we damn well please. No matter how malicious the content of our speech is, no matter whose reputation it damages, we have a guaranteed right to say it. Even when it leads to the death of another person. It's too bad, so sad, next victim!

We drive in a way that suggests we own the road. Speed as if there isn't a speed limit established by law. Yet, when someone else does it, why that is a whole different situation. That requires we chase them down and smash their vehicles or worse, we kill them. It's our right to defend ourselves, they tried to kill us by cutting us off.

We send money to disaster victims in other countries, but we won't volunteer to help people in our own communities. Our time is worth money, apparently those in need of assistance aren't worth much. Volunteer fire departments and emergency services all over America are closing because they can't get volunteers. The same thing is happening to volunteer police units who provide additional security for public gatherings like city parades. Then, of course, we swear about the increased taxes needed for municipal provision of these services. I wonder what will happen when a loved one has a heart attack and dies or a house burns to the ground while waiting for a response from a service that might be located 15 or 20 miles away.

We're a country with a chip on our shoulders daring someone, anyone to knock it off. The reality is the chip was knocked off 10 years ago exposing the fact that we are a bunch of blustering know nothings carefully educated by the GOP, Fox news and Rush Limbaugh. On the eve of the only attack by an enemy that we've ever suffered on our own soil, Eric Cantor is calling for a 40% reduction in payments to First Responders to disasters in 2012. I wonder what it will cost if you have to pay to have part of your house lifted off your body or that of a loved one. After all, without pay, there might not be anyone to help given how few volunteers there are in this America.

We've taken revenge upon the people who perpetrated this horrible disaster. It didn't give me my America back. All I can do while remembering that horrible day is wonder how the people who died then would feel about the America that exists today. An America where anger at a common enemy turned into hatred for each other simply because of differences of opinions. And I will spend tomorrow honoring the dead by remembering an event I wish had never happened and, given what has happened since, I wish we could forget.
Posted by Sherry at 7:43 PM 16 comments:

No Ten Cent Lovin', No Chicano and No Henna Either. Mondegreen!

According to Gavin Evans in a post he wrote about Mondegreens, the terminology came about thusly.

"The term "mondegreen" was coined by Sylvia Wright in a 1954 Atlantic article. As a child, young Sylvia had listened to a folk song that included the lines "They had slain the Earl of Moray/And Lady Mondegreen." As is customary with misheard lyrics, she didn't realize her mistake for years. The song was not about the tragic fate of Lady Mondegreen, but rather, the continuing plight of the good earl: "They had slain the Earl of Moray/And laid him on the green."

As with most misheard song lyrics, the mondegreen makes as much sense as the actual lyrics do. However, that doesn't really hold true in the song "Hard To Handle" written and recorded originally by Otis Redding. I can't ascertain whether or not the mondegreen in this case was born due to his singing or that of the Black Crowes cover from their first album. I suppose it could have occurred at any point in time since quite a few bands have actually covered the song.

I tend not to like covers. They disappoint me on some level. However, I must say that the Crowes did a bang up job on their cover of it.

Oh yes, the actual words from which the mondegreen originates can be found in the chorus of the song. The mondegreen itself is in the title of this post.

"Boys and things that come by the dozen
That ain't nothing but drugstore loving.
Hey little thing let me light your candle
Cause Mama I'm sure hard to handle now
Gets around."