Having Something And Yet Nothing To Say

I've given up trying to share things with people. There is just too much hate in this world. To much death, too much apathy. Too little empathy. Too few boundaries and too little humanity or kindness. Too many half truths, out right lies and disinformation that is intentional. I want no part of it so I am silenced and enjoying the peace. 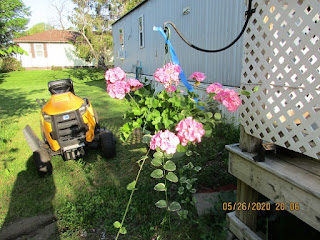 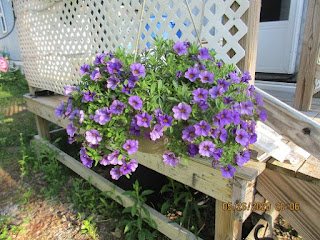 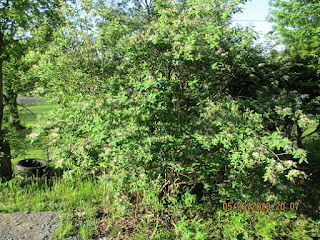 Why I Haven't Been Blogging 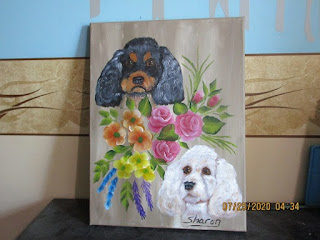 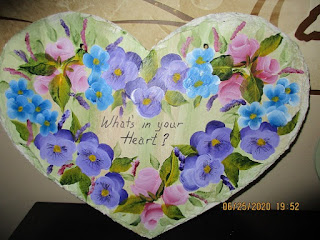 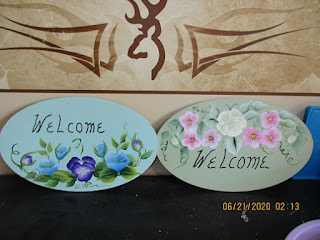 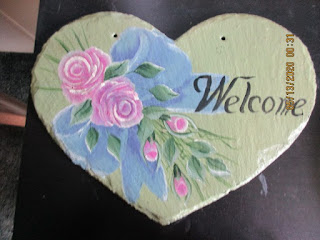 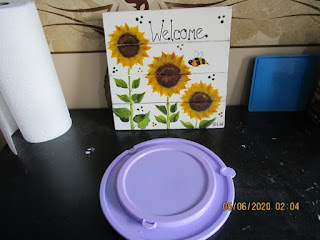 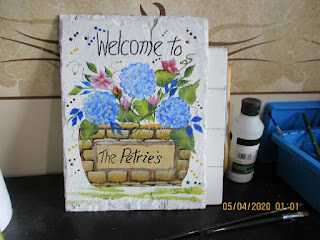 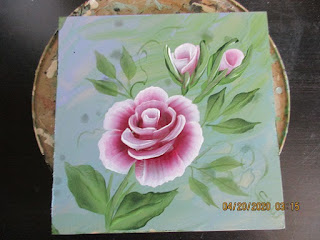 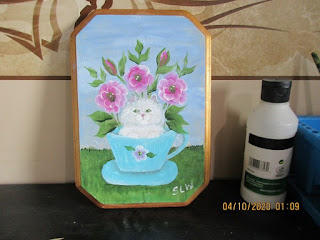 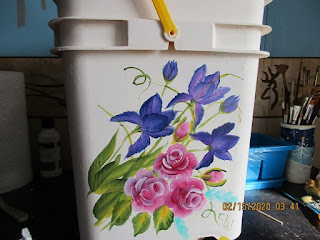 Questions, I Have Some 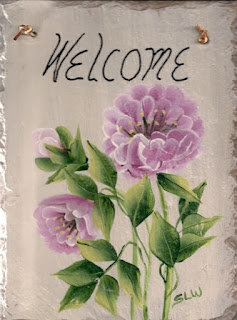 I am ready for green grass and warmer temperatures.

I know it is said that all good things must come to an end, but is snow a good thing?

Painting For The Fun Of It 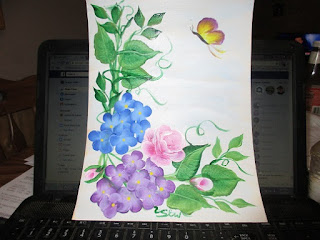 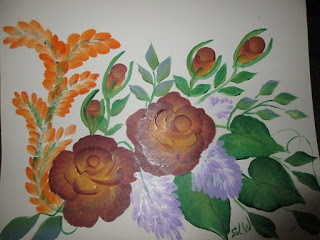 I've spent more time in the craft room lately than I have online. I'm working with colors I don't usually use on paper instead of wood or slate. I'm going to be framing these for my own home decor.

The Ups And Downs Of Blog Life

Blog life gets so confusing. What do you do when you find that someone unfollowed your blog without telling you they no longer choose to be blog friends? Did I do something wrong? Am I still welcome to comment on their blog? Is the reason they aren't responding to my comments because they want me to go away? I wonder if they think I'm a waste of time because I don't blog here enough? Oh well.

Over the years, 12 to be exact, I've conversed with probably a hundred or more different people online. I must say I didn't appreciate all of them,  but those I did appreciate have a special place in my memories. Some of them died, others are still around in one place or other, but most of them simply vanished without a word of goodbye. Do I miss them? Yes. Do they care? No. I say that with certainty since if it mattered to them, they'd have provided a keep in touch email or something.

Many of them keep in touch through Facebook and either I've changed or they have because some I simply don't recognize as their former selves. This is not a bad thing, it means we've grown as humans and found some measure of comfort with ourselves. We have real offline lives in which we are blessed with family, neighbors, pets that need care and friends that keep in touch.

It's nice to share our opinions and experiences with people all over the world and to get a glimpse into the lives of others. When it comes right down to it, I prefer the love found inside the 4 walls of my home. This joy is not something that can be shared completely with people I speak with online. It is something that words aren't capable of conveying in a manner that draws another person into the warmth and comfort that is my life. It's one of those things about which someone might say you kinda had to be there.

Some of my Facebook friends are here, they're my family and those I've known for a lifetime. More than one of them I've known for more than 50 years. They deserve a medal for having put up with me that long. As for the rest of them, they are the ones I call blog buds and friendly acquaintances even though I've never actually met them. They have a value to me and will always have a place in my memories. Even when they disappear without saying goodbye.
Posted by Sherry at 8:52 PM 4 comments: 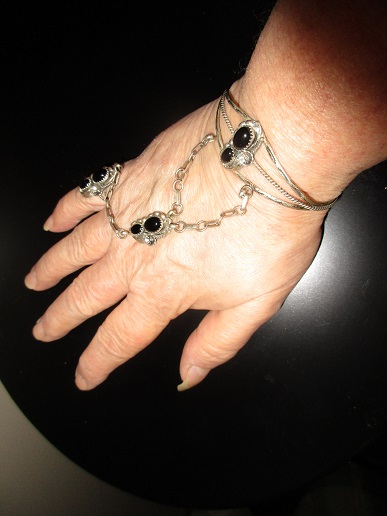 My other half got sick of having my jewel boxes all over his dresser, so he purchased one of those jewelry armoires for me this Christmas. During the locating and transferring of my jewels to this fine piece of furniture from Walmart, I found my silver and onyx slave bracelet. I almost wish I hadn't because when he bought it for me back in 88 or 89, the ring actually fit my ring finger. *sigh*

The last time I wore it was at a family get together and someone accused me of wanting to pretend I was a biker chick. I remember laughing and saying I was a wannabe biker babe. Which of course isn't what it is. The bracelet is styled after the silver and onyx work of a Navaho silver jewelry artist. The 80s was my Southwestern Native American phase. If it had the southwestern motif or was made from silver, turquoise and onyx, I had it.

During the filling of the armoire I discovered I am missing a diamond and sapphire tennis bracelet. It was a birthday gift to me from my step-father who, despite his desire to put on the ritz, usually bought the bling he gave as gifts from Montgomery Wards. Tennis bracelets are very scratchy so I probably took it off and stuffed it in a pocket of some article of clothing that I eventually gave away to the Salvation Army. I knew I hadn't seen it for quite awhile, but I wasn't as upset over it as I was when I couldn't find the slave bracelet.

I was overjoyed to find the slave bracelet mixed in with the jewelry that belonged to my Mom and Grandma. Not so overjoyed about not being able to fit the ring on the ring finger. Since I need to lose weight, I've decided that instead of buying an outfit that is snug and then working on fitting into it, I'll use the ring from that bracelet as the goal. In the meantime, I have all kinds of other necklaces, bracelets, rings and brooches that I will remind myself to wear.
Posted by Sherry at 2:14 PM No comments:

More Truth Than Fiction In That Book

I'm having a great laugh about this book "Fire And Fury". I don't believe all of it but there's enough truth in it to confirm my belief that Trump supporters are just plain stupid. The people who voted for him because he wasn't Hillary I understood, up until they became consistently verbal supporters of everything he did. Granted, some of them began to support him simply because the dreaded Democrats were against him and they got tired of hearing it, but how do you look yourself in the mirror when you do this?

Back before Trump in the White House became a reality, someone said to me "How do you go bankrupt running a casino?" Yeah, how do you?

I had to answer that question so I sat down one day and did the research.

First off, you lie to the New Jersey Gaming Commission about your financing. You convince them you have reputable financial institutions backing your plans and would never use junk bonds when you know the banks have said no and junk bonds with their usurious rates of interest are your financing.

Then you contract to smaller businessmen for the materials you need to create your vision, but you contract for more than you have to spend. If that's not bad enough, you change your mind so many times about what you want that it becomes impossible to complete the casino and open on time. Opening on time is the only way you'll make the payment for those junk bonds. The initial payment is coming due, you can't open because of your own decisions so you stop payments to your suppliers claiming they overcharge.

Without those regular payments, your suppliers fall farther and farther behind because they have to lay people off due to lack of funds for payroll or because they need to pay for materials to build the items you ordered and you are no longer paying them.

Some of these businessmen lost everything, including their homes. They didn't have all the dummy corporations that allowed them to go bankrupt and still make a personal profit. You do this 4 times all the while making a profit while the little guy who trusted you loses everything, but people convince themselves you're a Champion of the Middle Class.

I don't know on what planet destroying the lives of smaller businessmen to line your own pocket equals a fitness to govern the country I am proud to live in, but the people spoke and a spoiled brat born with a silver spoon in his mouth sits in the Oval Office.

I just wish someone could explain to me how, with a history of destroying smaller middle class businesses to line his own pockets, people think he's there to help the middle class?
Posted by Sherry at 8:39 AM 2 comments: