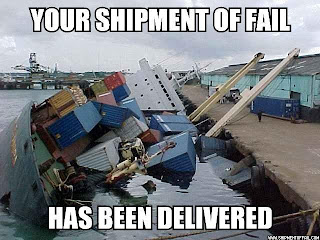 I don't know what to rant about first. The GOP Fail which is self evident in their presidential candidates or the Penn State Jerry Sandusky/Joe Paterno Fail. Better yet, maybe I should rant about a society FAIL!

The words that come to my mind are "morally bankrupt." What are we doing to ourselves? Next question...WHY? How have we gotten so far away from doing the right thing and into doing that which is expedient? What part of sticking your head in the sand is going to correct this mess?

How did I end up living in a society where politicians think it's OK to steal from the poor to give to the rich? When did sexual harassment become an excusable offense because the perpetrator is in a position of power? Why was it fine for people in positions of authority to condone the abuse of children in the name of having a winning college football team? What part of treating women as if we're chattel is acceptable because it's being done in the name of religion?

For some strange reason I keep thinking about something I read back in 2007. I was doing music posts for my Blogstream blog and had been listening a lot to Dio. I was trying to find a way to do a post about a song of his called "Killing The Dragon". It didn't really make any sense to me until I found an interview he did about the album that song was on. He wouldn't use a computer or much by way of what we call technology these days. He referred to all of it as "heartless little Gods." Said some day we'd be sorry we worshipped at the altar of technology. I'm beginning to wonder if maybe he wasn't right.

We used to know that not everything we want to do should be done. We used to understand that as a human, we had baser instincts that were best not indulged in. Now it seems that anything goes. We can do anything we want to entirely because it feels good to us. If it doesn't feel good to you, then too bad, I'm the only one that matters to me. Apparently for some it feels good to debase women in the name of sexual satisfaction. And for others it feels good to corrupt children and make their lives a painful experience. One that will damage them, in many ways, beyond repair.

I have far too many questions and no really good answers. I just know that I am glad I don't have my whole long life ahead of me. I'm afraid to see what the next 50 years is going to bring. If the changes I've witnessed in my lifetime are any indication, we will have entirely lost our souls by then.
Posted by Sherry at 5:13 PM 10 comments:

Undercover at Smithfield Foods, Supplier Of The Pork For The McRib

My grandfather was a farmer. Born on the family farm and as an adult went back to work on a farm after losing his factory position during The Great Depression. He was a beef eater, which is probably why he died young, but one thing he would not eat was veal. He couldn't stand the method by which the calves were raised for the veal market. He believed that putting an animal in a box, not allowing it to roam was inhumane. I wonder what he'd eat now since we seem to have moved the veal box into mainstream meat raising?

The more I learn about farming methods today, the less appetizing the products look to me. I can get my eggs from local farms, and my beef, pork and chicken as well. I've been on these farms, seen their operations and they are a far cry from the accepted practices that take place before our meats go to market.

I can no longer afford to eat meat on a daily basis since local farmers charge quite a bit more, but at least I know that what I'm eating wasn't tormented and tortured for my dining pleasure. Besides, a few meatless meals makes for a healthier human. I think Grandpa would be very proud of me. He helped raise a child that is willing to stand up for what she believes. Same as he did.
Posted by Sherry at 2:53 PM 11 comments:

Slapped In The Face

Here I sit, hopes dashed, the pain of unshed tears in my eyes. I will not cry, I refuse. The people I work for aren't worth my tears. No, I haven't lost my job, just my hope for something better and in a way, my faith in the people I work for. I didn't have much of it, but I did have some.

They are now offering a health insurance to their employees. Employees who gross less than $350 a week are being offered this health insurance to the tune of $145.71 per week. No part of it to be paid for by the company.  They think it's a big deal, we're supposed to be grateful. Instead, I feel as if someone poured acid on my face.

What really floored me is that basic common sense should have told them that they don't have an employee that can afford this. Given that knowledge, what is this? What part of taking $600 a month away from their employees leaves them with nothing left to live on are they ignoring? But WAIT! There's MORE!

In addition to the cost of healthcare there is a dental plan for a few extra bucks a week. I was so shocked by the offer, I don't remember the amount requested for that. All I can see when I think about it is the $145.71 per week figure. There have been weeks when I have client cancellations for doctor appointments and clients in the hospital that I don't take home much more than a dollar or two over that figure. I don't work 30 hours a week, so I only make $8 an hour.

Depending on the number of hours one works, they pay $8 or $9 an hour for actual client work. Travel time is paid by the hour at $7.35. Due to the travel time they won't give anyone more than 36 hours of client time and seldom more than 90 minutes of travel. Total gross pay on that would be $335.03. Social security, Medicare, Fed tax, state tax, and state disability will take somewhere around $50.60 out of that depending on the number of dependents they claim. Once the insurance comes out, it will leave the employee with around $138 and change a week.

Average rent here? Around $550 a month not including utilities. Plus, most of us need a car to make that much money and that won't be possible if we sign up for the health insurance.

If they'd have offered to pay half of that, I actually would have taken more hours to bring myself up to the point where I would feel comfortable with that kind of deduction. After all, with Hubby's business being seasonal, I need to be bringing home enough to keep the roof over our head, the lights on and food in our stomachs. Along with keeping the car in gas. I can do that on what I'm making.

They wonder why the aides aren't falling all over themselves to give their all for the company. Somehow they don't grasp that in order to have the food stamps and the health insurance Medicaid provides, they can't make more money than they're being paid. Most of them have kids to look out for, without a living wage, they're doing the best they can.
Posted by Sherry at 6:59 PM 17 comments: