You Really Think I'm Going To Sit In That Thing?

Relaxing in the bath? I don't think so thanks. Not me, not now, not ever. I'll take a shower. 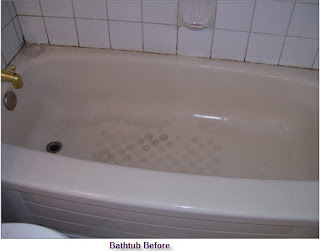 So, Hubby likes to sit in a bathtub full of water, bubbles and his own dirt. To each their own and all that kind of crap, but it ain't for me. Give me a long hot steamy shower, a loofah and some body wash that smells like coconut or raspberries and I'm in heaven. Not for me the standing water with a lot of bubbles. Not for me the "Calgon take me away" chit. No bath oil that smells like skunk musk at high noon. Nope, clean, clear hot water with chlorine, running down my nekkid bod and down the drain.
I dare you to take a look at your shower walls. All that tile, all that grout with mold and mildew growing on it. Fiberglass walls with pink gunk inhabiting the spaces where the parts meet. Bathrooms are damp moisture laden places, mold and mildew love damp moisture laden places. Ergo, bathrooms are breeding grounds for mold and mildew. What? You really expect me to sit in that? Hell no!
Stop to think about this, we scrub the tub, but do we really scrub the walls each time? We wipe the walls or use those useless against mold and mildew scrubbing bubbles. Even with those new shower spray cleaners there is still a build up of mold spores. Try not washing the walls of your shower for a month. I dare you. See what you will see, and mark my words, it ain't pretty. Pink and black slime grows there. Honest.
I never saw a shower until I was 8 years old. Baths were taken once a week and we washed all over daily. Sometimes twice a day. It wasn't until we moved into the house that Dad built, that showers could be had. I remember my first one, I hated getting water in my face. When given a choice between shower and bath on Saturday night, I'd choose bath. Now, I can't sit in a bathtub, I feel icky sitting in my own dirt. Can't convince me otherwise. My mind suggests that there's yucky stuff floating in there with me. Who cares that todays water is filtered and chlorinated? Who cares that daily showers clean much better than those "spit baths" that we used to take when I was a kid? There's icky, yucky stuff in my bath water, that's all there is to it.