He Who Pays The Bills Makes The Rules

There's a war going on in Twitter between some people over the above video. I'm not sure what I think about the Dad's parenting skills, but I don't see that this is an indication that he abuses her. Among the comments on Youtube is the information that Child Protective and the police have interviewed Dad and his daughter and are on the side of Dad. How they know this is not explained. I understand Dad's frustration. I have had step-children for whom I was responsible part of the time. Youngest never seemed upset when I enforced the "my house, my rules" dictum. However, after telling me that I was actually a more consistent parent than his Mom was, he is raising his children the way his Mom did rather than my way. Guess he didn't like those rules after all. He also complains constantly that both his children seemed to feel that parents are unpaid cooks, housekeepers and chauffeurs on demand. My Grandson seems to feel that his Dad is supposed to drop everything when his friend can be picked up to come and play games. It's never the friends parent that provides transportation, it's always Youngest. If you've ever seen a 14 year old boy throw a moody temper tantrum, you'll understand my frustration. Somehow said 14 year old seems not to understand that Dad has other things to attend to first. Like doing all the chores HE was supposed to do but didn't. Yeah, maybe Youngest should shoot my Grandson's laptop so he'll actually do something instead of spending time playing games. Oh, and for those who haven't figured it out yet. When you give a child everything they want without making them work for it, they respect neither you nor the expensive things you've been buying them. They come away from their childhood with an over developed sense of entitlement and have a very hard time coping with real life. You know about real life? The place where you don't get everything you want without working hard to get it for yourself? Yeah, that place. The place I've lived in for 62 years and have been told by those much younger than I am that I don't understand. My lack of understanding is probably why I am able to live within my means and not have to worry about bankruptcy every month. Ignorance really is bliss.
Posted by Sherry at 8:02 PM 10 comments:

Bad news first. Doctor says my spondylitis is spreading. I could have told her that. It arrived in my ankle last week. Either that or someone grabbed a railroad spike from somewhere and sledgehammered it into my left ankle. I'm rooting for the latter since that would be a one time deal. However, I'm pretty sure it's the former which means that walking is going to get a whole lot more painful. I told the doctor I was stubborn, she felt that word has negative connotations and prefers the word sturdy. Ok, I'll accept it, either way I'm not giving up.

Good news is that my blood pressure has finally come down to normal and my weight loss plateau has developed a tilt. Only 25 or thereabouts more pounds to go. Funny, I was listening to a commercial that stated that WOMEN over 40 had to work out at the gym for 1 hour a day just to maintain their existing weight. Hell, I'm 22 years past that and haven't been inside a gym since school. I'm losing and all I'm doing is eating whole foods rather than the processed junk I've eaten for years. Red Beans and Rice for supper with a nice big salad. Not out of a box made by Zatarians either.
Posted by Sherry at 4:49 PM 8 comments: 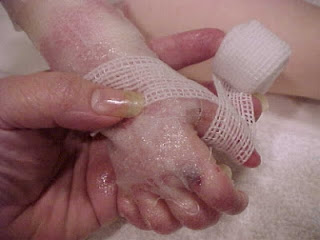 The above picture was taken from an information site for the genetic disorder called Epidermolysis Bullosa. This was the kindest, least disturbing picture I could find. It is the first picture in a series of pictures that shows how to wrap the baby's body in gauze to protect the child from further skin damage caused by simply touching the child.

EB children lack the connective tissue which keeps the outer layer of skin attached to the layers beneath it. Any kind of contact can cause massive blisters to form, which will break open and seldom heal again. They eventually lose their fingers and toes and sometimes their lips and teeth. Since they're little more than walking bedsores, they are prone to all kinds of deadly infections.

Until they die, usually by the age of 14 or so, children with EB in this form suffer the constant pain normally associated with second or first degree burns. One of my nieces has 2 of these children. She wouldn't have had the second had she been allowed free access to our local Planned Parenthood. Please note, she would have PREVENTED the pregnancy, NOT aborted it.

The month of her appointment for renewal of her birth control method our local RWNJ anti-abortionists were picketing. It was such a hostile situation that even Dr. Robinson's patients didn't cross the picket line to enter the building that Planned Parenthood shares with other businesses. Dr. Robinson is an ORAL SURGEON. A fact these people didn't care about when they were there. They prevented her from obtaining her birth control pills and she became pregnant during the time she was without. She, and many others like her use Planned Parenthood because they simply can't afford to pay for these services anywhere else.

The picketers intent was to shut down Planned Parenthood who, in their minds, is the biggest abortion clinic in the United States. The FACT that Planned Parenthood is a low income women's healthcare clinic seems to have gotten lost in the abortion issue. Despite Sen. John Kyl's statement that 90% of their services are abortions, which he then said was "not intended to be a factual statement", the actual number of abortion procedures is closer to 3% to maybe 10% of their services. The figures provided by Planned Parenthood indicates it's 3%, I'm including the 10% because I've seen it suggested elsewhere and am using it for the sake of argument.

The bulk of the services provided by Planned Parenthood is in the form of testing and treatment of sexually transmitted diseases, birth control information and cancer screening via breast examination and pap smears. They do this through private funding as well as Medicare/Medicaid billing.

Due to the need of some people to interfere in what should be a person's decision based on personal knowledge and ones conscience, ABORTION has become a political issue. If you take a good look at supporters of Sarah Palin, you will find that it exists largely because of her stance on the abortion issue. They focus on abortion because of their very narrow belief systems. Unfortunately, the Susan G. Komen Foundation's decision to withdraw funding from Planned Parenthood was met with gleeful support by those who are so rabid in their anti-abortion stance that they refuse to acknowledge the good done by that organisation.

My problem with all of this is that the very people who are unwilling to stay out of the uterus of women are the ones that will not acknowledge the results of their interference. They would cut the funding to my niece which pays for medical care of these two children. The feeding tubes, because they can't swallow. The numerous hospital stays because of infection. The price of the gauze to wrap them daily. The cost of homeschooling for the oldest one because he can't go to public school since there is no way to protect him. Even the local CHRISTIAN school has denied him a place in their classrooms. I can't blame them really, the cost of providing some form of protection from the other children would be prohibitive.

However, had people focused on the good that Planned Parenthood does instead of calling it an abortion clinic, some families might not have to stand silently by and watch these children suffer. All these kids want to do is play and not suffer pain.

I'm asking you to think about it, and instead of donating to the Susan G Komen Foundation, send your money directly to Planned Parenthood to be used for birth control education and supplies. Having had access to her pills might have limited our suffering to one child. If you have the stomach for it, Google Epidermolysis Bullosa and click on the pictures to see what it is we're dealing with and ask yourself whether you could handle that or not.