Spending The Day Doing Something For Me

I may not have had much to say so instead of talking I started doing. There is a room, a small one, maybe 7' x 10' that I had decided would be my crafting room. I've never had one before, just a table tucked into the corner of my bedroom which made things a little crowded but I dealt with that. The room as also where we chose to put the freezer but other than that, the room is for me to paint in.

This morning I realized the table was too close to the window and that the cabinet covered a feature on the wall that I was fond of and didn't want covered up, so I rearranged them. Then I saw that the chair I was going to use would not have much room to move in without bumping into the freezer so I moved the freezer closer to the outside wall. Once I did that, I started unpacking boxes and filling the shelves. 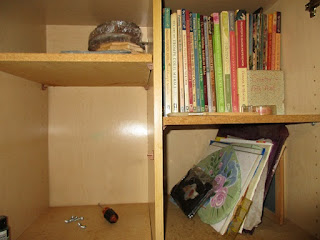 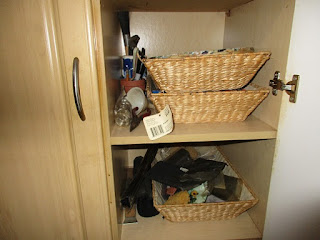 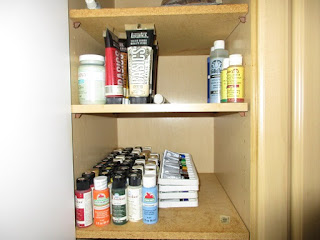 Books, blanks, baskets of brushes, daubers, palette knives, palettes, sponges, rollers and just about any tool you can think of. And the paint and finishes of course. I have a lot of stuff and it's now all organized and I'm happy. After the boxes were emptied it was just a matter of cleaning and taking another picture. 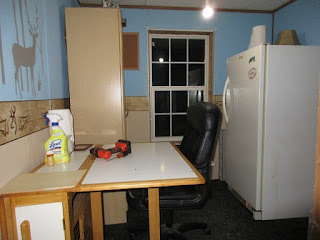 A whole room just for my crafts and it's big enough for me to keep things clean and neat. Now all I have to do is decide what I want to create.